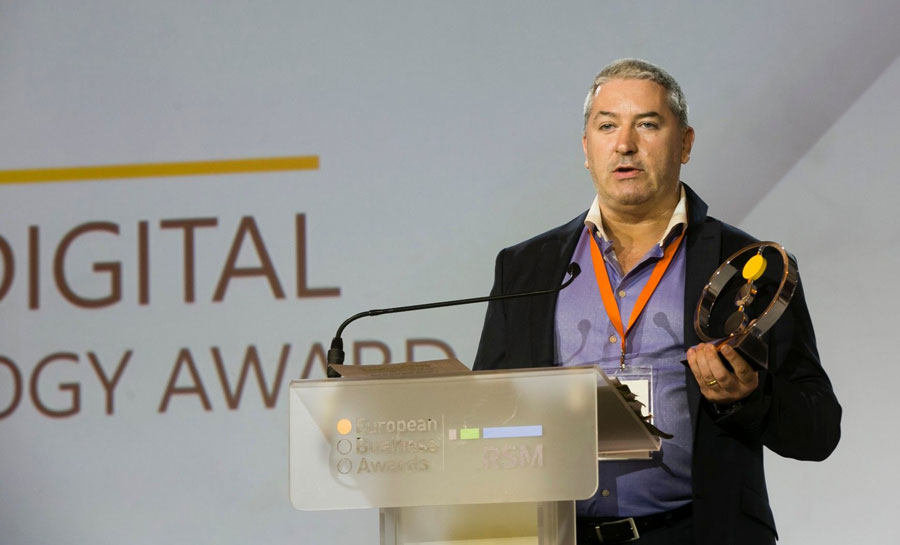 In 2008, Prepaid Financial Services was just starting out as an idea around Noel Moran’s kitchen table. Fast forward ten years and PFS have transformed into an international FinTech company whose innovative e-money solutions are present in 24 countries and process £2 billion every year. To add to their already remarkable success, this year they were named the Winner of The Digital Technology Award at the European Business Awards for their pioneering e-money and banking solutions.

Described by our judges as exemplifying the EBA’s core principles of success, innovation and ethics, we spoke with PFS’s CEO, Noel Moran, about how PFS embody these values throughout their company, including the incredible growth they’ve achieved, the importance of being able to give back to those who need it most and the global impact that winning at the European Business Awards has had on their business

Congratulations again on winning The Digital Technology Award at the European Business Awards! How did you feel when you found out that you had won one of the most prestigious prizes in business?

Initially, I was shocked. I was at the Gala in Warsaw with Lee Britton, our Commercial Director and when we were announced as winners it was the acknowledgement of all the hard work that our staff have put in over the last 9 years. When I took to the podium it was important to acknowledge all the staff that made this moment possible and particularly my wife Valerie who has stood by me in all the hard times. It is definitely one of our finest moments. Now that I have had more time to reflect on the night, I can see that we have had a clear trajectory from the start that led us to be named the No.1 Digital Technology company in 34 countries in Europe. I will never forget the feeling of hearing what the Judges had to say when we were announced as the overall winner. It was a priceless moment in time and given we have never been acknowledged within our own payments industry within the UK it made it all the more special.

What has been the most unexpected outcome of winning the Award?

To be honest, I am flabbergasted that we have managed to follow up winning this incredible award by winning another pan-European award which will be announced later in the year. We have noticed a significant increase in contact from the international press, particularly in America, since your announcement but also closer to home too. I can attest that the RSM European Business Awards certainly has global clout. Immediately following your awards, it was also interesting to note that one of the team received an invitation from the US to be a Judge for an international awards competition. The profile of PFS has been enhanced on a global level due to the Digital Technology win which can only be positive.

Prepaid Financial Services started out as an idea around your kitchen table 10 years ago and it’s grown exponentially ever since. You now have 160 employees, are active in 24 countries and have issued over 4 million cards, whilst also winning numerous awards for your innovations - did you ever imagine that PFS would have grown to become as successful as it has?

A decade later, I can see that we started something very special. You are right, a white oak kitchen table is where the dream began. I had great hopes when we started but it is so hard to make a start-up work. I just did not know if we could survive - and we almost did not at the very beginning. Now, we continue to thrive in the payments, prepaid, and FinTech spaces. Today, I feel that in many respects the PFS story and legacy is only ramping up and we have great plans for the future. It took us 9 years to build up the processing volume to £1 Billion GBP per annum and now just 12 months later we have doubled that to £2 Billion per annum in 2018.

What would you say is the secret to achieving such huge growth in your company?

You can never underestimate the strength of people power. From our employees to the partnerships and business relationship that we continually nurture in Europe and internationally, the personal touch is what PFS is renowned for. People do business with people and I am fortunate that businesses who need specialist payment services and innovation feel they can trust our custom-built offerings and the people to deliver them.

At the European Business Awards, PFS was described as being grounded in family values with strong roots tied to the town where you founded PFS; do you think it’s important for companies to maintain a sense of locality even if they are forward-thinking, global technology company?

If you look at any Entrepreneur who has made it, they all have one thing in common. They never forget where they came from and how hard it was to make it. I owe a lot to the people in my life from my hometown of Navan, County Meath in Ireland. My wife Valerie and I are involved in a number of initiatives to help local people from sports groups and athletes to arts in the community. These short and long-term commitments are very important to us and help us feel even more a part of the locality and the place where I was lucky enough to grow up. It is important that when you do get lucky in business you can give something back to the local community and we try to do this where possible.

What’s the biggest challenge that you’ve faced while at PFS?

That is a terrific question to ask. I believe that the most daunting challenge I faced over the years was scaling the business without investment. It is not an easy road to take but it is the only one that made the most sense to me on this journey. It was tough and there have been many obstacles but I have emerged stronger for it and the business is now still owned 95% by myself and the staff. All staff have a shareholding in PFS.

PFS’s prepaid cards have been able to help over 6000 refugees in Greece and you’ve also been working with MasterCard to provide 200,000 school meals in Mali; did you ever expect that Prepaid Financial Services would be able to have such a wide-reaching and positive impact?

The importance of having a desire to give back cannot be overemphasised for any business owner. To touch the lives of one family is a privilege. To have had an opportunity to assist so many Syrian families was more than we could ever have hoped for. There is a desperate situation in Mali right now. 10 days ago, the United Nations World Food Programme (WFP) updated us on the project. I am honoured to confirm that 200,000 young children have benefitted from nutritious school meals through PFS and Mastercard. Going forward, we have ambitious plans to fulfil on projects like these.

Through PFS’s Innovation Fund, you work closely with secondary schools and young entrepreneurs – do you think companies should be doing more to nurture the entrepreneurial spirit in the next generation?

I think that this is not only important but essential. At PFS, we believe in accelerated timelines. What I mean by this is, imagine starting a new business alongside successful business people and employees. This fast-tracks the initial launch phase and increases the likelihood of a successful route to market. The Entrepreneurial community should indeed nurture the future of business. So, as an example of the importance we place on this, our FinTech fund is the biggest investment pot of its kind in Ireland.

What has been your proudest moment at PFS?

It is humbling to comprehend the sheer scale of the RSM European Business Awards where a total of 112,000 companies from 34 countries choose to get involved. The proudest moment of my life to date has been to accept the Digital Technology award on behalf of every employee at PFS.

PFS have already achieved so much in the past 10 years since its inception, but is there something that you would most like to achieve in the next 10 years?

The next few years will see us focus on successfully achieving global traction with regulatory licenses in multiple continents. Expansion is inevitable with the amount of continual growth and job creation we currently enjoy. The market is also organically growing at an extraordinary rate and we are primed to be at the heart of the international payments ecosystem.

What’s the best advice that you’ve ever received?

To hold onto as many of the shares in your company for as long as you possibly can. This is extremely difficult for most start-ups. This is, I think, why the PFS story is different to many.